What is Urine Incontinence?

Incontinence of urine is involuntary loss of urine from the bladder.  This can be a very distressing problem.  It is also common, although many women are embarrassed about discussing it.  It has been estimated that as many as one woman in three experience incontinence by that age of 60 years.  The good news is that, for most women, effective treatments are available that can greatly improve a woman’s confidence.

What causes incontinence of urine?

Incontinence occurs when the normal controls of the bladder are not working properly.

There are two common types of incontinence.

The first is stress incontinence.  This occurs when supports of the bladder outlet, the ligaments and muscles, are not working effectively or have been damaged (for example, during childbirth).  When a woman coughs, strains, jumps, or does other activities that increase the pressure downward from the abdomen into the pelvis, there is insufficient strength to keep the bladder closed.  This allows urine to escape.

There are also very rare types of incontinence.  For example, the bladder may remain overfilled and never completely empty.  This causes an ‘overflow’ of urine as the bladder is stretched and can hold no more.  Another very rare type can occur when an abnormal connection forms between the bladder and the vagina – this is called a ‘fistula.’

Things that can make incontinence worse

Incontinence can be worsened by factors that either increase the amount of urine the body makes, that irritate the bladder or surrounding tissues, or weaken the supporting tissues.  Common examples include:

Some medications used for blood pressure or heart problems cause the kidneys to make extra urine.

These substances can irritate the bladder and worsen urge incontinence.

After menopause, the tissues of the pelvis may become thinner and more easily irritated.  This can also weaken the supports of the bladder neck.

Increased body weight not only increases the pressure within the abdomen, but also weakens the muscles of the pelvic floor.

Other health problems, and their treatments, can worsen problems with incontinence.  These include nerve problems such as multiple sclerosis, difficulties in moving like arthritis, and lung problems that cause excessive coughing.

What can be done to treat incontinence of urine?

Fortunately, a great deal can be done to assist women affected by incontinence of urine.  The first step is to understand that accidentally losing urine is not normal, and contacting your doctor.

You may be referred to a specialist gynaecologist.  Your gynaecologist will take a full history – about your general health, past medical problems, and pregnancy, for example – and will examine you.  Some problems, such as prolapse of the pelvic organs, or thinning of the tissues, may be found.  In other cases, the pelvic organs may appear normal.  Simple checks, such as keeping a diary of your bladder activity and what you drink, may be started.

In some cases, the urine will be examined to make sure there is no infection. Blood tests are sometimes used, to check for diabetes and other problems.

Because incontinence is commonly of the mixed type, your doctor may arrange tests to determine which is the predominant type.  A common test is called a ‘urodynamic’ test.  This will involve using small soft tubes called ‘catheters’, usually inserted into the bladder and the bowel, to measure the pressures in the bladder.  Sometimes, these tests will be performed along with ultrasound of the pelvis to develop a complete picture of the function of the bladder and pelvic floor muscles.

In some cases, a telescope will be passed into the bladder to inspect the lining of the bladder and the bladder outlet (the ‘urethra’).

There are many treatments that do not involve surgery, and these may be tried in the first instance.

Women who smoke should stop smoking, as well as reducing the number of caffeinated drinks (such as tea, coffee, and soft drinks).

If medications are causing increased urine production, the dose or time they are taken may be reviewed.  Poorly controlled coughing or other medical problems, such as diabetes, might need better medical control.

Women who are overweight or obese will be encouraged to lose weight, and this can have a dramatic effect in improving bladder control.  An increase in the general level of physical fitness can be very beneficial.

Some women with urge incontinence will benefit from bladder retraining, commonly taught by a specialist nurse.  This will involve gradually increasing the time interval between passing urine.  This may be done in conjunction with a ‘bladder diary.’

Oestrogen – the female hormone – may be used in either a cream or as a tablet or patch, to help thicken and restore tone to the tissues of the pelvic floor.

Medications that act on nerves are commonly used.  These will interfere with the nerve signals that cause ‘urge’ incontinence, and reduce the ‘irritability’ of the bladder.

Some women will be offered surgery to treat their incontinence.  Common types of surgery include:

Placement of a synthetic tape across the urethra (the outlet from the bladder).

Operations that lift the tissues around the bladder neck.

Since incontinence and prolapse of the pelvic organs commonly occur together, surgical procedures may aim to treat conditions at the same time. 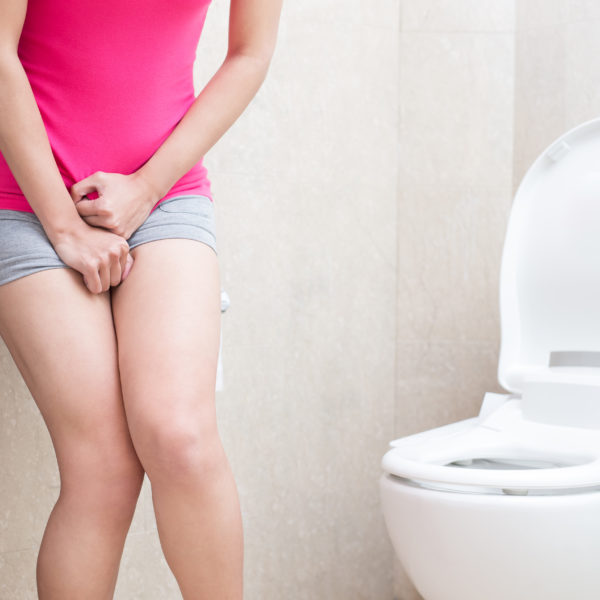